With funding from the Massachusetts Green Communities Grant Program, AEI studied a small 150,000ft2 middle school campus in Carlisle, MA to uncover energy savings opportunities through O&M changes that are no/low cost to the Town. The campus has several connected buildings, wild occupancy swings, and recently installed a thermal wheel as part of a major renovation to the largest building on the campus. The scope also includes building several years of baseline performance data for use when considering future capital projects.

By evaluating the Johnson Controls BAS data we uncovered several opportunities, one of which was an the outside air damper that was ~50% open during the heating season (NIST APAR Rule #2 Mode 1) when the Outside Air Damper Command was 10%. The CO2 levels in the space during this time period are rarely above 425ppm, indicating there is no reason for this excessive amount of ventilation. This would indicate that the outside air dampers are stuck, not operating smoothly, or are operating through a narrow range. 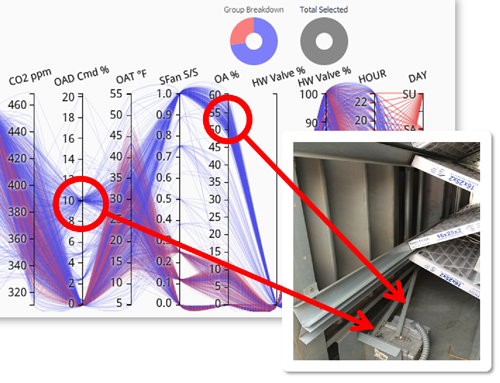 The introduction of excessive outside air was costing the school approximately $2,300 per year in fuel to condition the air. The data led us to the roof of the school where a disconnected actuator was found as the cause. The corrective action also saves the school approximately 1,565 therms (3.0 tons of landfill waste) in GHGe. We also recommended the installation of a VFD on the RTU to generate an additional savings of $1,509 and 10,800kWh (2.7 tons of landfill waste) from reduced electricity usage. 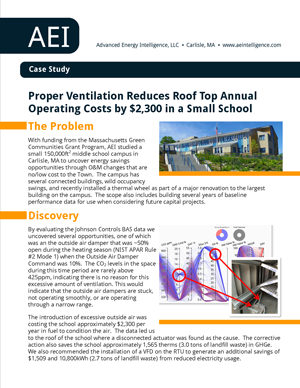 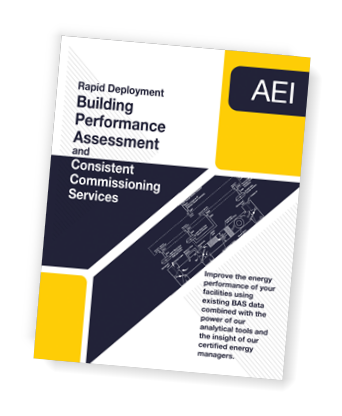